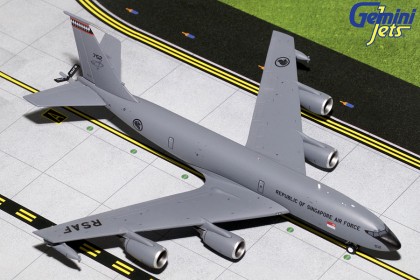 The RSAF acquired a fleet of KC-135 tankers from the USA in 1997. Originally built as the KC-135A for the United States Air Force, these aircraft were refurbished and modified into the KC-135R Stratotankers.

The oldest of the KC-135As was built in 1959, qualifying it to be part of the Merdeka Generation! Yet with a quick upgrade, they were mission ready - equipped with reliable and fuel-efficient CFM56 engines, along with the Boeing-developed Multi-Point Refuelling System that provided the flexibility to refuel both probe-equipped and receptacle-equipped aircraft receivers on the same mission.

These upgraded KC-135Rs were delivered by Boeing to the RSAF's Peace Guardian Detachment in McConnell Air Force Base, Kansas, in 1999. In 2000, the first KC-135R returned to Singapore, with 112 SQN being inaugurated later that year on 12 December.

Get the limited edition model to build your own airbase!