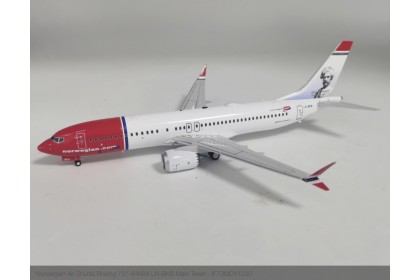 This is one of the aircraft of Norwegian Air Shuttle and its subsidiaries for the individuals that are currently, or have previously been portrayed on the fleet. Norwegian's livery consists of a red nose, followed by a blue ribbon and white, with the vertical stablizer initially featuring historically distinctive Norweigians, Swedes, Danes and Finns, but has since expanded to individuals of other nationalities across Europe and the Americas. An element of the airline's branding, the airline calls the practice its "Tail Fin Heroes" program, claiming that the personalities together with the aircraft's red nose signals the airline's change-maker spirit.